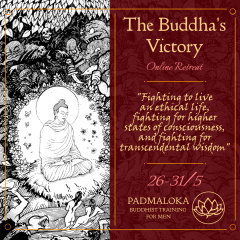 - An invitation to The Buddhas Victory -

To see Padmavajra inviting you to join us for The Buddhas Victory online retreat, please follow this link: https://www.youtube.com/watch?v=6YqOEK47GPs

“Followers of the Buddha are usually called ‘Buddhists’, but perhaps they could just as easily be called ‘Jinists’: followers of the Jina, the Victorious One. The Buddha did, in fact, once tell his disciples that they were ksatriyas, or ‘warriors’ … fighting to live an ethical life, fighting for higher states of consciousness, and fighting for transcendental wisdom. According to the Buddha, the spiritual life is an active life, a strenuous life. We might even say that it is a militant life.”
(Sangharakshita, ‘The Buddha’s Victory’)

Strong words spoken by Sangharakshita on full moon day in May 1987 during his talk celebrating the Buddha’s enlightenment, or as he put it on that occasion – the Buddha’s Victory. Sangharakshita warned his listeners against taking too soft an approach to spiritual life, for as the example of the Buddha’s battle against Mara shows us, the Buddhist path demands deep, intense and sustained commitment, with many difficulties to overcome along the way.

On this retreat, which coincides with Buddha Day, we will be celebrating the Buddha’s enlightenment by studying Sangharakshita’s lecture ‘The Buddha’s Victory’, as well as two others: ‘Discerning the Buddha’ and ‘The New Man Speaks’. Together they form a set of classic Sangharakshita lectures that draw out key lessons from the life of the Buddha, all of which will be essential to us if we are to live out the deep, intense and sustained commitment that constitutes ordination into the Triratna Buddhist Order.

This retreat takes place between the 26th and 31st of May. It’s open for men who’ve asked for ordination and Dharmacaris in the UK and EU.

To book onto the event or find out more about it, please follow this link: https://www.padmaloka.org.uk/retreats/2021/buddhas-victory-online